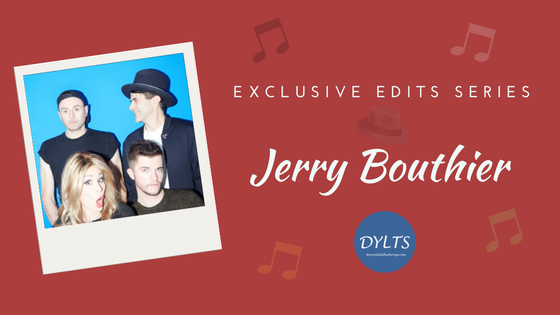 Last month, we’ve started a new series with Jerry Bouthier to share some of his exclusive edits. This time, he shares his edit of Marcus Marr’s “High Times”. It was also the opportunity to ask him a few questions about his approach and his new song “You Be“, featuring Club Domani and Cristina Bugatty.

This month, you chose to share your edit of Marcus Marr’s recent single “High Times”. Last time, you said you were looking for that particular connection with a song, what made you pick this one?

It’s a wonderful track, so elegant, kind of deep and yet funky (live bass and guitar please!), and a little nostalgic too (those keyboard chords… that sound!). The mix of happiness and melancholy within the same track is always a winner for me. You know, life balances between these two opposites, it makes sense for music to reflect that ambivalence within the same compositions, feels more real than songs that are simply one or the other. 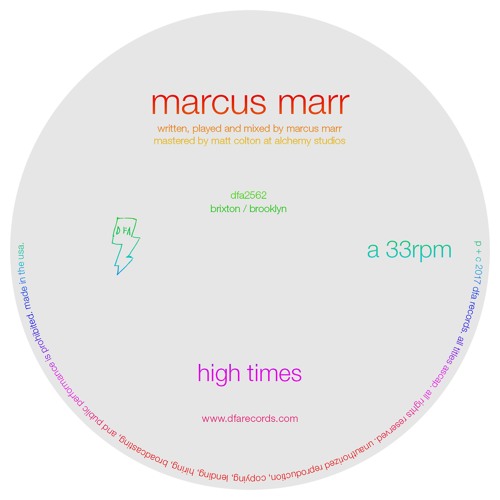 Chords are essential if you want to touch people’s hearts – which is not necessarily at the top of djs list, I concede lol. I love guitars, pianos, strings, keyboards… they take the experience to the next level. I’m an eternal dreamer and seek evasion through musicality, even whilst dancing… particularly whilst dancing! Chords take you places and suggest emotions you don’t even suspect. What bliss.

Chords take you places and suggest emotions you don’t even suspect.

You know, you build a track a bit like a puzzle, you put all these pieces together, layering different notes on different instruments in a particular order. And at some point, all the pieces of the jigsaw fit together producing these sensations that send messages to your mind and goose pimples to your body, from dark, sad, angry to positive, happy, ecstatic… and so much more. Such a powerful medium if you manage to initiate that sparkle! It’s easy for me to say but exploring new melodies and harmonies is so important, so much sounds the same right now because of poor musical skills and lack of creativity. That’s the major drawback from the democratisation of music-making if you ask me. Not enough musicians, and possibly too many djs/computer geeks haha.

The incredible language that is music requires a lot of time and effort to master.

The incredible language that is music requires a lot of time and effort to master, this fascinating alchemy of mathematics and emotions form such a complex maze. It’s like magic, almost mysterious. Music’s emotional constructions can be difficult to dissect precisely and if you don’t speak the language you’re just left out of the game.

You told us that editing allows you to ‘model the music to fit your sets’. Can you explain us your approach for doing so?

Well if you’re gonna play new music to people, the tracks’ structures better be pretty faultless as the dancefloor’s attention span is a lot shorter than it used to be. Sixteen or even eight bars too many, and you can easily lose people’s attention to your disadvantage, particularly in smaller clubs. Back in the day in the UK, if your music was great, you could play a 95% new music set and blow the roof off, the enthusiasm, the appetite for electronic music (and cheeky pills) was beyond belief.

It’s essential to captivate the dancefloor from the word go and not let it lose interest.

Times change, electronic dance music has been around a long time and it sure can take a lot to wow a crowd these days. This is why in my experience it’s essential to captivate the dancefloor from the word go and not let it lose interest. Develop a narrative around your tracks, some kind of thread with movement, highs and lows. Take people with you and don’t let it run out of steam. It’s the same paradigm with edits…

Since the CDJs have taken over from the SL12000s mixing is a lot quicker than it used to be, you don’t need 1’30 at the start of the record and the same at the end as you did when mixing vinyl. So it’s to your advantage there’s no down-time throughout your performance, just events one after another, every 8 bars, continuously, so that your set makes one whole.

There are endless ways of playing the same tracks without telling the same story. Only you can do it your way. Because you play your own personal tracks/edits in a certain order and in a certain way, you become as important as the records you play.

What is the crowd’s response when you play this edit? What is the perfect time and atmosphere to play it?

There are so many clubs, cultures and situations, every set’s different really. Deejaying begs a great deal of sociology, you have to work out quickly who’s in front of you and what they wanna dance to. The best clubs attract a mix of people (music, attitude…), so it’s never quite the same trip, you have to make that extra effort and constantly rethink what you’re playing and why, adapt to new environments. It keeps it exciting and never boring cos you’re always trying to push the envelope and experiment. There’s nothing more thrilling than being able to get away with playing something that you shouldn’t in that particular situation… a little perverse but the feeling you’re not playing it safe is invaluable.

There are so many clubs, cultures and situations, every set’s different really.

As inspired as it may be the structure of the beautiful dubbed out original wasn’t quite right for my peak time mood and needed that little nudge to make it tighter with a bit more momentum; a little rejig of the events, a few dj cuts here, some extra filtered sections there… Again to be welcomed into my box a new record has to be perfectly tailored to my DJ needs and not beat around the bush. It should start, do its thing well and out, and then another one, and another one… Without realising, your set is over and people have enjoyed themselves for a couple of hours.

Once you’ve gained the trust of the dancefloor you can pretty much take it anywhere.

This energised version can be played as first record to get people vibed up in the right direction but it’ll also sound great as last tune of the night when the dancefloor is ready to fly away and get dreamy. Now although it’s not exactly a turbo-charged tune, in the right place at the right time, it’ll also work at the peak of the night… once you’ve gained the trust of the dancefloor you can pretty much take it anywhere and ‘High Times’ has enough gorgeous sensual vibes to be one of the winners of your set, just seize the moment. I hope the artist won’t mind the brief sharing of my tweakings of his tune. Thanks a lot Marcus! Looking forward to meet you sometime : )

You have just released a new single with Club Domani “You Be” on your label Continental, can you tell us more about it? 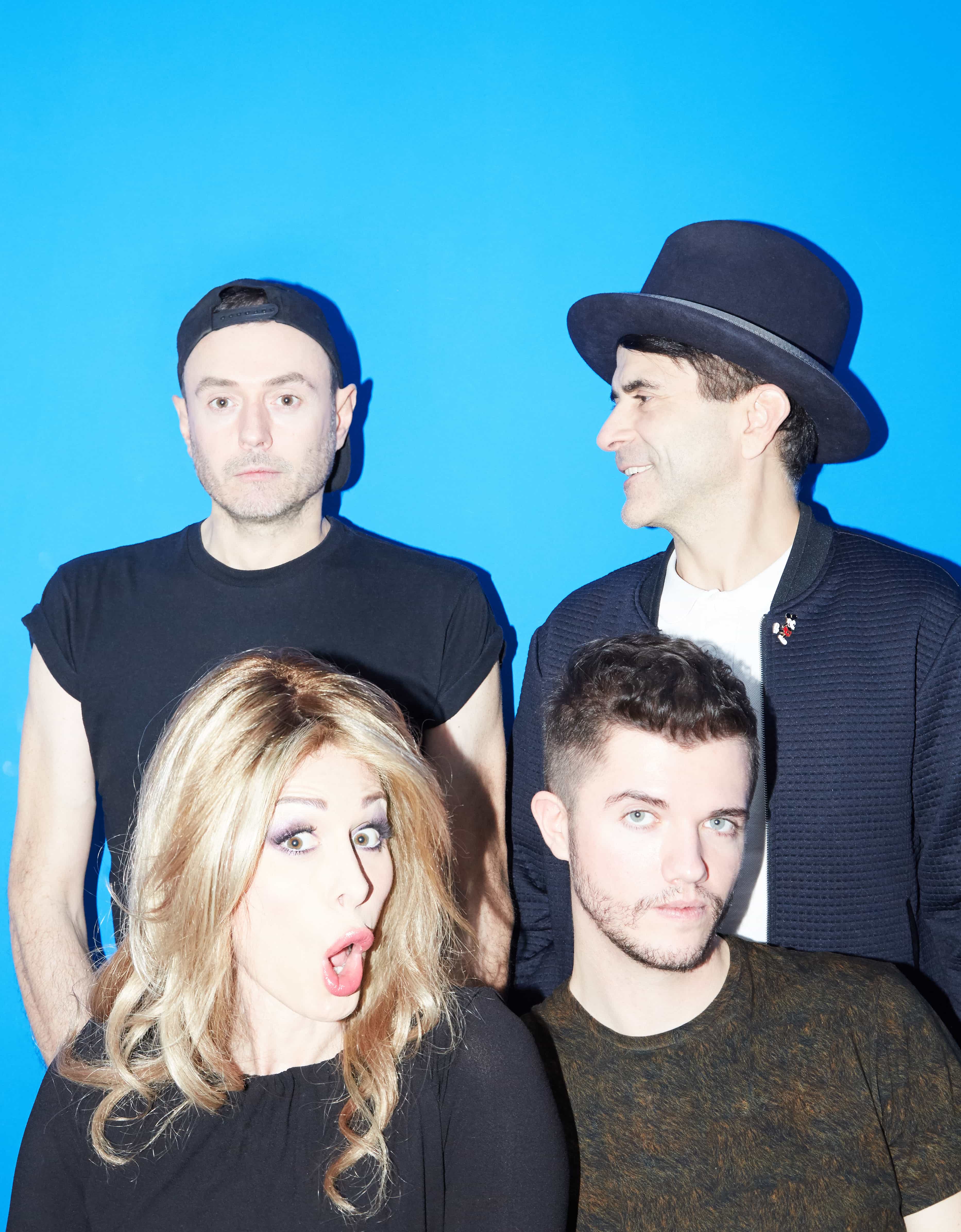 Indeed I’ve spent time in Milan producing with my good DJ friends Andrea Ratti and Sergio Tavelli AKA Club Domani, the name of their night on Saturdays at Plastic, one legend of a club. Boasting a personal music policy and a colourful cross-generational crowd of regulars this long running Italian institution never forgets going out is about fun and glamour, serving as magnet for all fashion-art-music types in town and beyond. In clubland where the DJ star system rules, it’s refreshing to find clubs where the individuals in the audience are the true stars of the night.

When the infamous BoomBox in east London (where I was resident DJ) ran its course, I felt I’d never find a similar free-spirited haven. I started to dj at Plastic and instantly felt at home. The two clubs share much common ground, fashiony but not pretentious, eccentric, wild, brash… No wonder Sergio used to jump on a plane after Plastic on Sunday morning to go party at BoomBox in London in the evening!

The song gets inspiration from the electronic disco days before house, it delivers a universal message about individuality and being unique.

So we’ve made ‘You Be’ with Cristina Bugatty on vocals, a glamorous actress who does a silly YouTube channel. We shot the video at Plastic, it’ll be out very soon, check it out to find out what Plastic/Club Domani is about… The song gets inspiration from the electronic disco days before house, it delivers a universal message about individuality and being unique. Basically: whoever you are, be yourself. In these troubled times, it feels great to put a brick up the wall of positivity and tolerance.

Listen to the release below or on your favorite music platform: